With the Vector-iSYSTEM Timing Bundle, AUTOSAR ECU developers can record, analyze, and evaluate the timing behavior of an embedded system in less than seven minutes. The free package includes scripts, header files as well as samples and is compatible with the Vector AUTOSAR Classic base software MICROSAR.

To prove functional safety in complex embedded software applications such as in the ECUs of state-of-the-art vehicles, in-depth analysis techniques are required. Recording trace and timing data, for example to determine the execution time of an application, represents a major challenge for embedded developers. A couple of factors, such as the microcontroller, operating system, and debug interface, make every setup unique and require individual configuration of the analysis system. Applications based on multicore processor architecture as well as the AUTOSAR standard can be particularly challenging in this respect.

The Vector-iSYSTEM Timing Bundle contains a step-by-step guideline for integrating scheduling tracing across the entire tool chain, starting with the configuration of MICROSAR.OS in Vector's DaVinci Configurator Pro, through iSYSTEM winIDEA, to the analysis of the results in the iSYSTEM Analyzer or Vector TA Tool Suite. In addition, the necessary scripts are provided to automate the entire process. The sample included in the bundle using MICROSAR and the pre-recorded analysis data allow users to first get a quick idea of the timing analysis and its results. In a second step, the developer can adapt the provided scripts to their real live application and start the analysis right away from there. To run the samples and visualize the results, the user needs an iSYSTEM winIDEA and / or Vector TA Tool Suite installation.

Profiling is the process of recording, analyzing, and evaluating the timing behavior of an embedded system. If we talk about AUTOSAR Classic profiling, we mean profiling the runtime behavior of an AUTOSAR Classic based application, specifically the application itself, the Run-Time Environment (RTE), the Operating System (OS), and other parts of the Basic Software (BSW). With the resulting data, users can cover use-cases such as CPU load analysis, event-chain analysis, timing requirements validation, timing constraint validation, OS metric calculation, and more.

Fig 1: The result of AUTOSAR Profiling in iSYSTEM winIDEA. The Gantt-Chart shows the state of different OS (Tasks/ISRs) and RTE (Runnables) objects over time. The dark red color indicates that an object is running.

Profiling is based on trace measurement techniques such as software, hybrid, and hardware-based tracing. A trace is a list of events with timestamps in ascending order enabling the user to examine the runtime behavior of a system. In the following, we focus on hardware-based tracing. Hardware-based tracing relies on a dedicated on-chip trace logic, which captures events of interest and sends them off-chip. Figure 2 shows the steps involved in recording trace data from a target/ECU. Depending on the microcontroller, zero or more of the following techniques are available. The available trace techniques influence which Trace Objects are recordable and for how long. 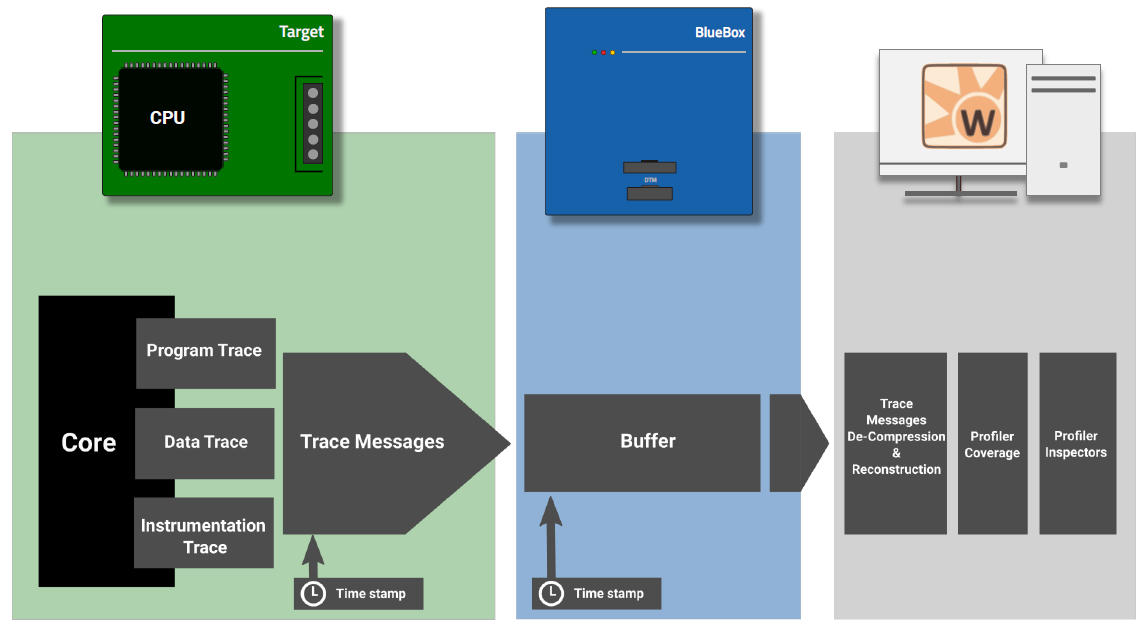 Fig 2: Recording a hardware trace with the iSYSTEM BlueBox and winIDEA integrated development environment. A dedicated on-chip trace logic generates trace messages that are captured by the debugger and sent to the host computer for profiling. Within the Vector-iSYSTEM Timing Bundle, this data is exported to a file in a format called BTF (Best Trace Format) and imported to the Vector TA Tool Suite for further analysis.

The general process for AUTOSAR profiling always follows the same pattern. First, the user assesses the available trace capabilities (see above), the OS and RTE in use, and the trace objects to analyze. Second, the user configures the OS, winIDEA, and hardware trace logic. Finally, winIDEA traces the application, profiles the recorded data, and makes it available for analysis by the user. The result is a detailed view of the OS and RTE, as shown in Figure 1. The user then analyses the data in winIDEA itself, generates reports, or exports the data for analysis in other tools such as Vector TA Inspection. To summarize, AUTOSAR Profiling requires three steps assessment, configuration, and profiling.